A route for everyone

Starting from the Information Point Albir (Alfas del Pi) (1), walk up the  street "Cami de la Cantera," which as its name suggests ends in an old quarry from which stone was quarried, but we can not access this point and we must turn to the left at the streets "Syrio" and "Neptuno", until we reached a parking area where one of the entrances to the Natural Park can be located, the route to the  Albir lighthouse. (2)

A few metres ahead there is a small recreation area (3). From here also the route 2 (yellow) starts that climbs to the crest of the Serra Gelada (4). "Caleta del Metge" and viewpoint We head up the paved route towards a tunnel in the mountain (7), but just before on the left hand side is a dirt track (5) which descends to a small cove known as " Metge Cove, "and soon after there is a circular balcony with  a magnificent view of the bay of Altea in the background the  Penyal d'Ifach (6), surrounded by spectacular mountains . Arriving at the entrance of the tunnel (7), we can find another smaller viewing point(8).

Ocher mines cove "La Mina" We continue to the lighthouse and after travelling 300 metres, we come across the path (9) that slopes down gently to the mines of Phoenician origin and subsequent Roman exploitation, from which ocher was extracted to be used as a dye well into the century, when it fell into disuse after the introduction of other new substances for this activity. The "Boca of the Balena" About 500 metres after  the tunnel we arrive at  a bend in the road (10) where to the right and above you can see in the shade of the mountain a natural hollow known as the "Mouth of The Balena "or" Cova de Bou ". Albir lighthouse at the end of the road we reach the El Faro del Albir (12) where access is not permitted. Just before reaching the light house there is another viewing point to the right (11). 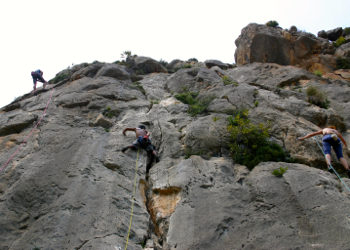 Back to Sports in Benidorm

Where is the limit?