The first changes in their diet have emerged 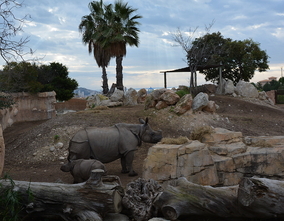 The baby Indian rhinoceros (Rhinoceros unicornis), which was born last September in the facilities of the Terra Natura Benidorm nature park, has begun the phase of emancipation from its mother, called Shiwa. The little Duna was born weighing 50 kilos which, after four months, has increased to the surprising figure of 200 kilos. A growth of about 50 kilos a month indicates a good rate of development, as her caregivers have commented.

Coinciding with the beginning of the emancipation of the breeding, the first changes in its feeding have appeared. In the beginning, the mother and the baby consumed between them about 30 kilos of forage and feed, as well as about 10 kilos of fruit and vegetables a day. This feeding pattern has now changed. In fact, veterinarians have introduced changes to their diet when they detect an increase in consumption by the offspring, so the solid intake of fruit and vegetables has been supplemented by two kilos a day.

Thus, the calf's diet is now practically the same as that of an adult rhino, although, despite the fact that Duna has now fully developed its immune system, from time to time it still demands its mother's milk, which provides it with a high nutritional content for its physical development.

During this period of growth, great changes in behaviour have been observed, both in the calf with its mother and in the mother herself with the rest of the rhinoceros group. Shiwa is now more relaxed and has reduced her aggression towards the other rhinos in the group by reducing her overprotection of the newborn calf.

As the days go by, Duna becomes more confident and playful. She is constantly trying to explore her surroundings, moving further and further away from her mother's control for longer periods.  The baby begins to venture out into the meadow alone, showing a preference for running around in this part of the facility rather than in the heated area.

During this period, the vets and caretakers of Terra Natura Benidorm have been able to verify the excellent evolution and development of Duna through the various veterinary checks it has undergone. In them, the condition of the little girl's eyes, ears and mouth has been exhaustively assessed. In view of Duna's incipient emancipation, the park team is assessing her possible union with the third female rhinoceros with the aim of getting her to begin to relate to other members of her species and thus complete her development, both physically and psychologically.

Terra Natura Benidorm is a reference member within the European breeding project (EEP) of the Indian rhinoceros. According to the strategic plans of the European Association of Zoos and Aquariums (EAZA), when the small Dune completes its development and is weaned it will be moved to another centre to join other genetically compatible specimens and thus contribute to preserving biodiversity on the planet.

At present, it is estimated that only 3,500 Indian rhinos remain in the wild. The species has made a remarkable recovery, with only 600 individuals left in 1970. It is on the Red List of threatened species and is considered a vulnerable species. Translated with