#BenidormTeEspera''' arrives on the streets.

Starting this Monday, several benches located around the city are labeled with the 'hastag' coined on social networks during the confinement BenidormAWaitsYou' arrives on the streets. 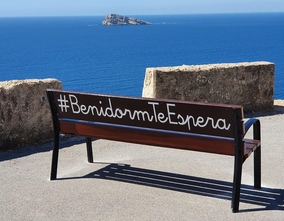 The initiative '#BenidormTeEspera', #BenidormAwaitsYou promoted by the City Council in the first weeks of the confinement, reaches the streets of the city.

Since Monday, several benches located in different spots have been labeled with the hashtag #BenidormTeEspera, (Benidorm Awaits You) coined in social networks during the state of alarm to show the world the best corners of the city and encourage the revival of tourism after the confinement.

A hashtag that is still in use also used daily by Visit Benidorm and many users in their individual accounts.

It has not been revealed the exact location of these benches, as Benidorm wants that people found them during their walks or through the photos published on social media. To the four benches already installed and labeled will be added in the coming days more, also located in landmarks.

#BenidormTeEspera started at the end of March as a daily virtual exhibition of images of our city taken by residents and visitors before the lockdown, with which in the most difficult moments of the sanitary crisis we launched across the social network of the Town Hall a positive message showing the world the reasons Benidorm is unique.

The original project resulted in over 700 photos submitted by the people.