A survey among beach users this summer shows that 86.1% were satisfied with the plot 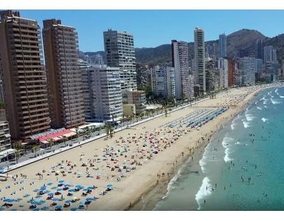 The beaches of Benidorm have today added up to two million users since they reopened on 15 June. This can be seen from the data provided by the company that holds the concession for the integral management of the beaches, RA Benidorm, in the 33 access points to the sands of Levante, Poniente and Mal Pas.

Benidorm Beach safety is being shown as a reality that can be scaled to meet the objective of having safe beaches for everyone every day, where users of the Benidorm beaches "enjoy them in freedom and feel protected".

Only a month ago, on August 6, the beaches of Benidorm reached its first million users in this phase of new reality implemented from the incidence of covid.

For months, in June, between the 15th, the date of opening of beaches ordered and controlled by the implementation of the Benidorm Beach Safety protocols of the Benidorm DTI+Safe initiative, and the 30th, 132,393 users enjoyed the Benidorm beaches. In July, the number of users reached 694,240. In August, the number of users exceeded one million (1,042,142) with five days registering more than 40,000 users, and the 15th of August was the busiest day for Benidorm beaches with 43,610 users. In the first six days of September there were 126,522 users, bringing the total number of users of the beaches of Benidorm since 15 June to 1,995,297, so that today there will be more than two million users through the seating systems that count the entries of users.

Taking advantage of the Benidorm Beach Safety device and platform, Benidorm Town Council, in collaboration with the company that owns the concession for the beach services and VisitBenidorm, has carried out a survey of users in order to find out their opinion and improve the services offered and the health and safety measures adopted.

From 3,023 surveys answered, it can be seen that 29.1% of users were very concerned about the incidence of covid and 71% had a high level of concern.

Thus, 49.3% of the users described themselves as very satisfied with the system of parcelación implanted in the beaches of Benidorm against a 4.7 that was very dissatisfied. More than 81% were satisfied compared to 7% who were not.

As far as the reservation process is concerned, 47.2% considered it to be positive compared to 24.1% who were against it, with 19.4% being very satisfied compared to 14.3%.

With regard to the attention given by the staff of the Benidorm Beach Safety programme, 48.1% were very satisfied, compared to 2.3% who were unsatisfied.

With regard to the safety offered by the model applied to Benidorm beaches, 70% considered it to be satisfactory, with 33% rating it as very satisfactory, compared to 3.1% who gave it the lowest rating.

In the section on suggestions and improvements, users pointed out multiple aspects related to the full day shift, the possibility of smoking on the beaches, the distance to the bathing area, the number of sunbeds, issues of cleanliness, the use of masks when walking along the beach, the recovery of unoccupied plots that were once again available, restrictions on sports practices, the width of the promenade area next to the water line and the difficulty of accessing the website. There have also been numerous congratulations for the implementation of the system, the functioning of the bathing area, the accessible beaches, the attention of the staff, the lifeguard system and the police presence.