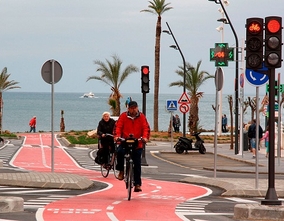 Benidorm has its aim at reaching 134 kilometres of cycle lanes by the end of the year, and therefore becoming the second largest city in the Valencian Community in terms of area destined for cycling, only after Valencia.

Thus, Benidorm would be boosting the use of bicycles to move around in in the city, and therefore promoting sustainable mobility. Currently, Benidorm has 91.1km of cycleways and other roads where bicycles are allowed.

One of the projects that will help reach the goal is El Moralet Green Circuit, which will have 12.3km of bicycle paths, and has been designed by the Mountain Section (BTT), part of the Benidorm Cyclist Union.

The bulk of the remaining kilometers arises from the conversion into ‘cycle streets’ of various roads and avenues, mainly in the Old Town, La Cala and Rincón de Loix. This will be possible thanks to establishing speed limits throughout the whole city that will allow the coexistence of both bicycles and other vehicles.

One of Benidorm's cycling network strengths is precisely its mesh, which allows bicycle users to move practically from one end of the city to the other, circulating at all times on enabled roads for this vehicle.

The increase in the past years of Benidorm's cycle lanes

Benidorm has experienced a significant increase in the area used for bicycles.