Zara chooses Benidorm as the setiing for their new international campaign 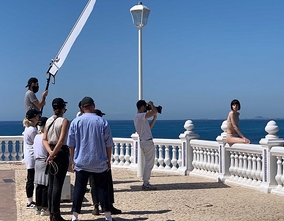 The city of Benidorm is the setting for Zara's new international campaign, focused on lingerie, and that was launched last Monday on the multinational brand's web page.

Six North's production for Zara Woman took place last week and was shot in iconic Benidorm sites like El Castell. They also shot in other locations like the Comunidad Valenciana Avenue's karting or the Madeira Centro hotel, from which you can see Benidorm's characteristic island.

In just 48 hours, Benidorm was able to attract this production, competing with other international destinations. It was the city's quick coordination between the Film Office, with the Public Space department and the Local Police station, what made the production company Six North finally choose Benidorm as their setting for the campaign.

It was BemySet, a production company from Valencia, who suggested Benidorm as the perfect destination, because of our exteriors filled with light and a summer atmosphere.

The staff consisted of 26 people, who stayed in Benidorm for two days, and spent around 25,000 euros in the city including accommodation, food and rentals.

This production, that was launched internationally, links Benidorm to one of the most influential brands in the fashion world. This way, Benidorm strengthens its recovery and positioning in the advertising segment, a segment that was diminished during the pandemic because of the mobility restrictions.

The shots from this new campaign can be seen on Zara's web page, and in most of them you can clearly recognise Benidorm. The photographers who took the pictures in this campaign are Robin Galiegue and Pierre Ange Carlotti.