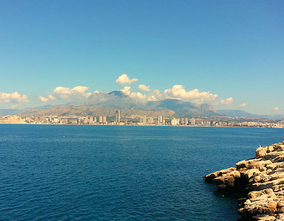 Relatives and friends of Pere Maria Orts i Bosch have remembered the academic and historian on the 100th anniversary of his birth. An intimate and private act organised by the historian's nephew, Vicente Ibañez, and the poet Antonio Bravo in the Mare de Déu del Sofratge cemetery.

In front of the family pantheon which houses the ashes of Pere Maria Orts i Bosch, Adopted Son of Benidorm who died on the 26th February 2015, the poet Antonio Bravo recited his composition 'Yo, Pere María (1921-2021)', included in a soon to be published collection of poems in which the academic's voice is the narrator and protagonist.

The poet Bravo pointed out that it is an honour for Benidorm to have a person of the importance of Pere Maria Orts i Bosch, who was one of the most important patrons and humanists of the Valencian Community, as evidenced by the enormous artistic and cultural heritage bequeathed to various public institutions in the region.

Pere Maria's nephew said that his uncle always wanted to rest in Benidorm, with his family; and for this reason, after his death in Valencia, his ashes were transferred to the Mare de Déu del Sofratge cemetery, to the pantheon of the Orts Berdín and Salvá Orts family.

It is important to note that from the 5th of july of 2021 until the 4th of July of 2022, Benidorm commemorates the 'Pere Maria Orts i Bosch Year'. During this event, the work and life of Pere Maria Orts i Bosch will be honoured and disseminated, especially among young people, so that his figure and legacy will live on through future generations.

As stated in the agreement to commemorate the 'Pere Maria Orts i Bosch Year', the academic is a key figure for Benidorm. A person with close links to the town, in December of 1985 he was declared Official Chronicler and Adopted Son and in January of 1986 his figure and crucial contribution to the study and recovery of local history was recognised, giving his name to the first secondary school in the municipality.

Later, in 1971, he published 'Arribada d'una imatge de la Verge a Benidorm', the basis for the representation declared of Touristic Interest that is staged annually by La Barqueta, Cultural and Recreative Association.

Apart from this work of study on the history of Benidorm, Pere Maria Orts i Bosch donated part of his legacy to the city. To this legacy, we can add the generosity of his sister, Josefina Orts i Bosch, who donated to the city the collection of medals that Pere Maria received throughout his life from different entities and administrations.

His research and philanthropic work extended to the whole Valencian territory, which earned him different recognitions from institutions such as the Valencian Parliament, l'Academia Valenciana de la Llengua, the Consell Valencià de Cultura and the Real Academia de San Carlos, to which the declaration of 'Pere Maria Orts i Bosch Year' is going to be sent in case they consider extending it to the rest of the Valencian Community.

Among the institutions to which the scholar bequeathed his artistic and documentary collection are the Museu de Belles Arts Sant Pius V, the Arxiu del Regne de València and the Biblioteca Valenciana Nicolàs Primitiu.