The Accidental Tourist, a tribute to Benidorm's tourists.

It highlights the uniqueness of Benidorm that Martin Parr, Cristina de Middel and María Moldes have been able to reflect and have exhibited internationally reflecting happiness. 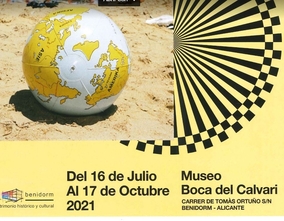 It will be open to the public until October the 17th at the Boca del Calvari Museum, from 3 pm to 10 pm.

The exhibition entitled “El Turista Accidental” (The Accidental Tourist) arrives at the Boca del Calvari Museum. It brings together photographs by the Alicante-born Cristina de Middel, the Galician with links to Alicante María Moldes and the British photographer in love with Benidorm, Martin Parr.

The purpose of the exhibition is mass tourism and its repercussions on the urban landscape of Benidorm and on those who live in the city, reflecting essentiality and an uninhibited image of the Benidorm that the three artists know in detail, according to the exhibition curators Rafa Soria and David Trujillo.

The Boca del Calvari Museum exhibits on its 3 floors the works of the three artists who use three completely different methods to capture their snapshots: analogue, digital and Smartphone, mastering the technique to the point of taking photography as a form of making art.

By Cristina De Middel, National Photography Award 2017, the series "I love Benidorm" is on display; by psychologist and photographer María Moldes, the exhibition features the series "Scenes of radioactive life" and by Martin Parr, the revolutionary of photography documenting the "kitsch" side of reality, a documentary series of visual experiences captured in the city.

The exhibition will remain in the Boca del Calvari Museum until the 17th of October from 3:00 pm to 10:00 pm, respecting the existing security measures and protocols in the Valencian Community.