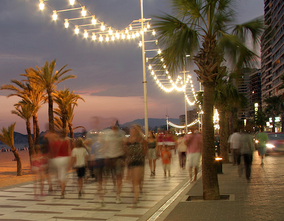 Benidorm’s cultural programme for the month of September includes a wide range of activities for all kinds of audiences and which opened with the first session of the 9th International Organ Festival, in Sant Jaume and Santa Ana’s church.

Apart from the 9th International Organ Festival, which will have its second session in October, the September musical programme includes three other events.

The first one will take place on Sunday the 12th of September, with the concert Jazz Big Band of the Societat Musical l'Illa in the Julio Iglesias Auditorium, followed on the 18th by a performance by the Chamber Orchestra of the Unión Musical in the Assembly Hall of the Town Hall.

The third event, scheduled for Saturday the 25th of September, in the Julio Iglesias Auditorium, is the 20th Festive Music Composition Contest, Villa de Benidorm.

L'Espai d'Art of the Town Hall, will host the exhibition of Beatriz Aramburu entitled 'Life is beautiful, sometimes', which will be on display from September the 22nd to the 11th of October.

All the activities will be carried out in accordance with the health regulations at all times.

The full details of the cultural agenda for September can be consulted here.