Scientific baptism of the Tossal de la Cala: the global study of the site is published in AESPA's journal

The article compiles and interprets all the information obtained in the successive excavations of the Roman fort, focusing on the architectural aspects. 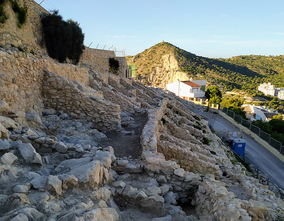 The Tossal de la Cala site experienced its "scientific baptism" last week with the publication of a comprehensive study in the journal of the Spanish Archaeological Archive (AESPA) published by the Spanish National Research Council (CSIC).

The study, entitled 'The late-republican Roman fort of Tossal de la Cala (Benidorm, Alicante). Autopsy and reinterpretation of a historical site', is signed by Feliciana Sala, professor of Archaeology at the University of Alicante (UA), and her colleague, also an archaeologist and professor Jesús Moratalla, archaeologist Sonia Bayo and Ángel Morillo, from the Complutense University of Madrid.

This article presents how the information from the ancient excavations of the Tossal de la Cala has been recovered and interpreted in the light of the data obtained in the successive excavation campaigns that Benidorm has promoted with the help of the University of Alicante to recover and enhance the value of a site that was thought to have been razed to the ground.

AESPA's journal is one of the most important in the country and one of the best indexed at European level.