Illustration 'made in Alicante', the new proposal of 'Benidorm Expone / Benidorm Exhibits' 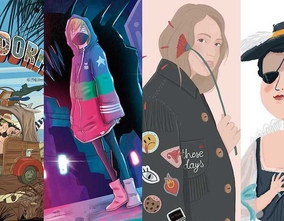 Illustration made in Alicante by four artists from the province. This is the new proposal of 'Benidorm Exhibits' that from the 5th of November until the 14th of January can be seen in the Urban Art Spaces Ponent, Els Tolls and El Carrasco.

The 'Benidorm Exhibits' initiative seeks to give visibility to the greatest possible number of audiovisual artistic disciplines and for this reason, in addition to previous proposals for photography, painting and urban art, we now add illustration; a genre which is also very attractive and with which young people feel very identified.

For this exhibition, we have opted for established artists with a consolidated and very recognisable career such as Fran Ferriz and Arly Jones, and also for emerging artists who are signing very relevant and personal works such as Paloma Marqués and Paloma Pérez.

The work of Fran Ferriz will be exhibited at l'Espai d'Art Urbà Els Tolls. For 'Illustración Alicantina', the concept artist and designer from Villajoyosa, one of the best illustrators in the world, has chosen a series of illustrations made during the pandemic and in which his style is very recognisable, with clear influences from comics and the underground.

El Carrasco will be the space of Arly Jones, who with his classic and timeless style proposes for this exhibition a set of very fresh and summery illustrations related to Benidorm, all of them handmade with a digital finish.

Paloma Marqués and Paloma Pérez will share l'Espai d'Art Urbà Ponent, which is going to have a woman's stamp, not only because the works bear the signature of two illustrators, but also because women are the main topic of their proposals.

In this way, Marqués presents a sentimental universe with simple compositions but with a strong message; while Pérez presents 'Mujeres en lucha' (Women in struggle), with which he rescues some of the best-known female characters in history precisely because of their courage and determination.