Benidorm Fest 2023, which will have more capacity and will be held from 29 January to 4 February, gets underway.

The mayor, the president of the Generalitat and the president of RTVE sign the protocols for the next edition, which will again the representative of Spain in Eurovision Chanel, the first Benidorm Fest winner, returns to the city to launch the 2023 edition. Mónica Naranjo will be one of the presenters at the festival, which will have two semi-finals and a final, for which tickets will be on sale from 20 to 60 euros. 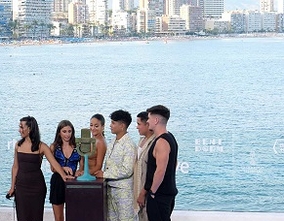 Benidorm Fest 2023, the second edition of the event from which the next Spanish representative at Eurovision will emerge, is already underway. This Tuesday, the mayor, Toni Pérez; the president of the Generalitat Valenciana, Ximo Puig; and the president of RTVE, José Manuel Pérez Tornero, have signed in the city the general protocol of collaboration between the three parties for the organization and development of the new edition of the festival.

This year's edition will be held from 29 January to 4 February, will have a larger capacity and will have three galas: two semi-finals and a grand final. This was announced during the presentation of the festival, held at the Paseo de Tamarinos, by RTVE's director of communications, María Eizaguirre, who also revealed that the artist Mónica Naranjo - who spoke by videoconference - will be one of the presenters of the event and the composer Nacho Cano, who was present at the event, will preside over the professional jury.

After the signing of the collaboration protocol, it was highlighted that last year, at a time when the pandemic was still complex, the illusion returned with the Benidorm Fest, a very strong and brave bet that has been a success. Likewise, the alliance with RTVE and the Generalitat to launch a new brand that has all the essence of what a city and an internationally recognised tourist destination like Benidorm has done for culture and music.

The first edition of Benidorm Fest exceeded the initial expectations and dreams and proved to be a great operation for music, for Benidorm, for the Generalitat and for RTVE, as well as being a huge lever for the participants. Regarding the 2023 edition, it has been shown that it will be unforgettable.

The president of RTVE, in turn, said that with the Benidorm Fest managed to "draw international attention with the selection format" and involve "millions of young people" with the festival and with Eurovision, which reached "a record audience" unprecedented in recent years. He also stressed that it has managed to generate "a movement" around Eurovision that brings together all audiences, "from the elderly to the young".

As well as kicking off the 2023 edition, this morning's presentation marked Chanel's return to Benidorm. Accompanied by her dance troupe, the artist recalled her time at the Benidorm Fest and all that her time at the festival and Eurovision has brought on a professional level. Although she has not completely ruled out participating in future editions of Benidorm Fest, the artist has advocated "leaving the place to other people" to "live the experience".

During the event, Maria Eizaguirre and Eva Mora, head of the Eurovision delegation have advanced some details and news of Benidorm Fest 2023. Thus, from all the proposals received, 16 participants will be selected. Eight will perform in the first semi-final, scheduled for 31 January, and another eight in the second, to be held on 2 February. From both semi-finals will come eight participants, who will compete in the final on the 4th February. Benidorm Fest will kick off on 29 January with an 'opening' event.

Among the novelties of Benidorm Fest 2023, the expansion of the capacity for the galas and the launch of tickets to attend them, which will go on sale with a price range ranging from 20 to 60 euros.

As one of the hosts of the galas, Monica Naranjo has advanced that this edition will be "stronger and more powerful" and predicted that "the performances and future representatives will be spectacular", so much so that "sooner or later" Spain will win Eurovision, a festival that, in her words, has returned to "fall in love" thanks to the Benidorm Fest.