The exhibition is part of the 'Pedro Zaragoza Orts Year' and opens to the public this Friday at l'Espai d'Art Urbà Ponent. Each vignette includes a chapter or aspect of the figure that was the precursor of the current Benidorm. The texts that accompany each image are signed by Albert Alcaraz, repeating the tandem of 'The charm of Babel'. 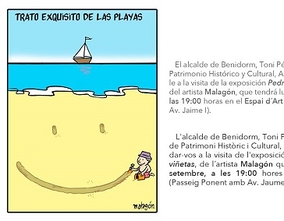 Within the commemorative acts of the 'Pedro Zaragoza Orts Year', Benidorm opens an exhibition to the public this Friday that, through 19 illustrations signed by the artist Malagón, covers the life and work of the former mayor of the city for a good part of the decade of the 50s and 60s.

This is a proposal that makes it possible to divulge the figure of Pedro Zaragoza in a fun, different and very attractive way, reviewing the most important episodes of his personal and political life and which, furthermore, even allows the viewer to make a idea of ​​what was the personality of who was the precursor of the current Benidorm.

We are talking about a figure that continues to arouse great interest, not only in the local population but also very prominently outside Benidorm, in the national and international media and in the academic fields of tourism and urban planning, since many of its actions and strategies for tourism planning and the territory continue to be fully valid and topical so many decades later.

L'Espai d'Art Urbà Ponent is the space chosen for this exhibition, which will be exhibited until the beginning of the year and in which once again Malagón and the writer and documentary filmmaker Albert Alcaraz shake hands, who have already worked together on the book 'The charm of Babel, of the geographies and stories of Benidorm', in which Pedro Zaragoza has a prominent space.

Once again this tandem comes together, in this case to draw a very complete profile of Pedro Zaragoza, from which to remember and value his figure, and also to approach a fundamental passage in the recent history of Benidorm: the incredible development and change experienced by the town from the 1950s to becoming the tourist benchmark it is today.

Neighbors who wish to join us this Friday at 7:00 p.m. at the opening of the exhibition 'Pedro Zaragoza, life and work in vignettes' have been invited and to go through it together with the artist himself, in order to find out all the details of how forged each of the illustrations.