What is the secret?

First of all, Benidorm has great environmental conditions, thanks to its Serra Gelada National Park and the surroundings areas that gives the Bernia and Puig Campana mountains, as well as 7 km of coastline bathed by the Mediterranean Sea.

Its compact city model proves to be more sustainable and reduces the pollution because of the proximity that implies the reduction of travel by private vehicle (it can be reduced below 20% of the total of every day). In a city like Benidorm, you can go anywhere by foot.

The urban model of Benidorm differs in its urban structure, characterized by the construction in height and the density as a principle. Benidorm is an eminently tourist town characterized by a compact aspect of the city that has been chosen with the intention of altering the territory as low as possible. The intention is to accommodate a large number of tourists and residents in the smallest space as possible.

The compact aspect of Benidorm has been created with the intention of altering the territory as little as possible. It has sought to accommodate a large number of tourists and residents in the smallest possible space.

Each building in the city of Benidorm has, as a general rule, except those located in the areas of the Old Town, gardens and large unsealed areas, free spaces for public or private use, custom gardens, swimming pools, sports courts ... This is due  to the urban regulations, that does not allow to build on the entire surface of the plot.

In terms of energy efficiency and the integration of renewable energies in Benidorm, the height growth model was chosen, to enlarge the maximum accommodation capacity with the consumption of the least possible space, and allow the ventilation and lighting all rooms. Most of the buildings are oriented to the south in a way that guarantees sunlight. This circumstance allows the city to require a minimum consumption of electricity in lighting. 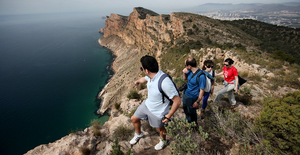 A natural park with 5,564 hectares 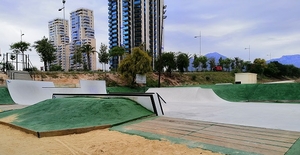