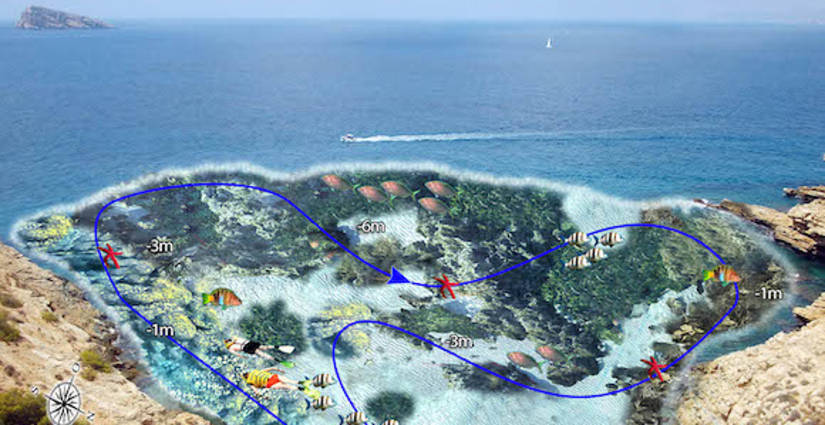 North of the renowned Playa de Levante beach the fine sand gives way to a steep and rocky stretch of coastline, at the foot of which nestles the small cove known as Cala de la Almadrava. Access is via Dos Calas street, where we’ll find a car parking area. From here it takes just a few minutes to walk down to the cove, which is an unexpected oasis of peace in ever-boisterous Benidorm.

The cove faces south west and offers views of the iconic Isla de Benidorm. The seabed here is clean, with a nice balance between areas of rock, which is sometimes jagged, sometimes polished, sweeping meadows of Posidonia oceanica or Neptune grass, and swathes of white sand: biodiversity guaranteed.

The ideal route here sees us starting at either of the two extremes and tracing a circular path. If we start at the northernmost tip, we approach the wall, which will be on our left. Here the seabed is hard, the rocky formations an extension of the coastline, sometimes an almost-flat platform, sometimes a sub-aquatic ledge. The many hollows and holes in the rock can harbour species such as blennies and gudgeons, snakelocks anemones (known locally as “sea noodles”) and the occasional hidden crustacean. To our right, meanwhile, we’ll see the sand gradually give way to seagrass, which grows lusher as we go.

As we reach the tip of the cove the wall merges with a verge of seagrass covering a sandy bed about 8 metres below the surface. Now we can cross to the other side of the cove, to the south face, gliding above the Posidonia prairie dotted with boulders that are covered in a peculiar algae known as peacock’s tail. Here we are bound to spot several salema porgies in shoals of 10 and more, their golden scales glowing as they graze among the seagrass.

As we approach the other side, the water gets shallower and the seabed gives way once more to rocky substrate and sandy clearings. Here we are likely to see species such as striped seabream, which love a sandy seabed, and white seabream or sargo, which prefer rocky bottoms. With the south face to our left, we then head back to the beach, completing a fabulous outing in the waters of the Serra Gelada.