Benidorm will host the Cyclocross World Cup this upcoming January 22, the first event of this discipline in Spain after 11 years of absence

Full Programme of the event here

The Cyclocross World Cup is the most important and pretigious tournament within the winter specialty cycling calendar. The thirdteenth and second-to-last section of the circuit will take place in Benidorm, returning to Spain after 11 years of absence.

During the presentation, Benidorm was honored with the participation of worldclass riders such as Felipe Orts (Burgos-BH), the best specialist in the history of Spanish cycling, Lucía González (Nesta-MMR), the absolute master in the national women´s cycling scene, and Kevin Suárez (Nesta-MMR), the current number 26 in the world ranking. Team directors, representatives of different regional federations and the president of the Royal Spanish Cycling Federation (RFEC), José Luis López Cerrón, also joined.

Cyclocross in Benidorm has gained popularity as it is increasingly recognised in the “crosser” world as an ideal destination for its pleasant weather, air connectivy, and accommodation offer adapted to their training needs.

Thanks to the city's proven experiencie in the organization of sporting events, the tournament will have an undeniable success as far as participation for both athletes and general public.

Hosting this championship represents a major opportunity to bring Benidorm and the cycling world closer together. Benidorm is a leading touristic destination with an important attractiveness in Central Europe, countries in which this cycling modality is highly popular. Hence, the race Benidorm-Costa Blanca represents a great promotional tool that will also allow the principal figures in the cycling world to compete in a top-level cycling tournament avoiding long travels.

Benidorm will be one of the main events in the upcoming season, becoming a referent in the cycling world and a flagship event for Spain. A great accomplishment for our city, which also strives to be an example of inclusion and equality by offering the same awards to men and women. 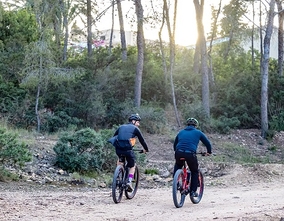